Race 1: We all came off the start pretty close. The Fat Controller leading slightly and Wingman going far, low left to get speed. On the way into the top mark, ghetto took a higher position to get over a fleet of Etchells going slow downwind and gained 100m on the rest. The wingman came flying in from the left and was right behind the fat controller as the kites went up. The run was pretty calm and we went round the mark in about the same positions as the top mark. Up the next work there was a 10deg right-hander and ghetto gained another 200m. The wingman and the fat controller once again got around the top together and were battling it out down the final run. The Wingman came in 2nd by about 50m to the fat controller.

Race 2: Only 2 left and the wind had crept up to 15kn. Once again Ghetto got off to a good start with the wingman seemingly getting stuck in irons off the line. Around the top mark with a good lead, ghetto powered away in pressure, but prawned the kite at the bottom mark and the wingman cruised past. After f&*king around trying to get 100kg of prawns into the boat, we finally got going again only to see the wingman go around the top mark. We chased for one more lap then called it a day when the race committee decided to pick up all the marks. The wingmen took home the silverware for the Northern Allboats (a teeshirt...normally get rum or wine).
1st: The Wingman
DNF: Ghetto Sled
DNS: The Fat Controller

A solid day all up and hopefully more races like the first one during the rest of the season.
Posted by QldSkiffies at 8:46 PM No comments: 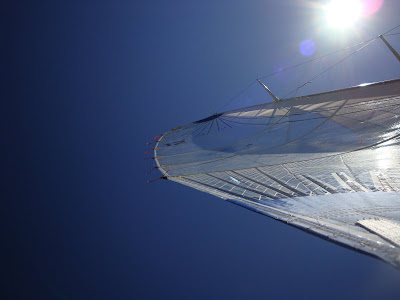 I took Paulo's steed for a burn on saturday with his trusty-yet-skipperless crew John. Paulo bought a new Big main before he went to GTown and wanted us to try it out.... OK. A nice little 8-12 Northerly greeted us and she bolted. I can confirm that the new main makes the boat 3.4% faster and 2.8% higher.... guaranteed. Thorpy also said its fully sick.
Oh yeah. No one else was game to take us on so we "won" both races.
Posted by QldSkiffies at 5:08 PM No comments:

The RQYS opening day started with drizzle and no wind. By 10am however, the clouds had cleared and there was a shifty westerly floating around. The blazer-wearing festivities got underway, but we kept clear of that until the free sausage sizzle came wafting across the rigging lawn. The newly reddified Wingman, the newly carbonified Challenge and the newly Cassified Ghetto Sled were wearing 2nd rig and were itching to go. The kite ride to the start line off Green Island started as a nice flat-water 2-string ride and ended up as a crew-in-kitebin "situation". The wind proceeded to shift around through all 360deg for the rest of the day.

Race 1 got off to a slow 1-string start. We got away well, then Challenge caught a nice puff up the first work, but the Wingman lead around the top mark by 100m. The run saw Challenge crew Wayne fall overboard and have to swim back to the boat. During the next work a northerly shift came through and we were on the right side of it and took the win.
Race 2 got underway with a 90deg southerly shift right on the gun. The Wingman and Ghetto Sled saw it coming through the Etchell fleet so both did the pin-end-on-port (Bandit) start. A soldiers course around the next 5 buoys (with 360deg windshifts included) resulted in The Wingman packing up and going home. We took the win again.
Results:
Race 1
1st: Ghetto Sled
2nd: The Wingman
DNF: Challenge 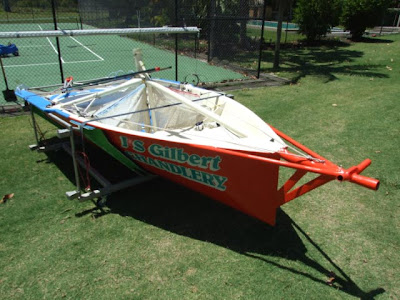 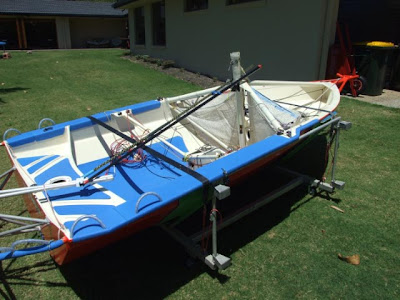 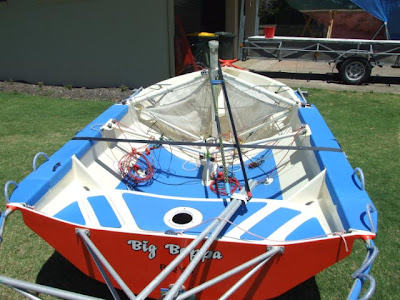 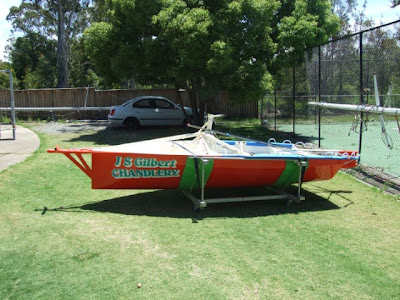 Looks like good weather for the first day of the season. Time to strap in the 2nd rig and go for a blast. Racing out of RQYS, Manly 5th September. Be there from 10am. Race 1 starts 1:30pm.

Posted by QldSkiffies at 8:59 PM No comments: