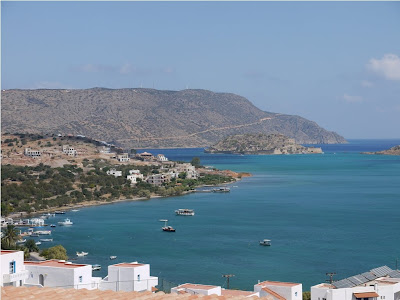 Anyone up for a regatta in Elounda, Crete...
View from our hotel room.
Posted by QldSkiffies at 6:15 PM No comments:

Yet another cracking weekend..!!
How nuts was the wind on Saturday..!! Code flag Sausage was flying high :o) Although Timmy has now been sacked from sausage coordinator... 5 sausages do not go far with skiffies... What were you thinking..!!!

So yeah for those of you who didn't turn up to the club on Saturday... It was howling... When we arrived it was 32-36kts out there... It eased a bit.. 26-32.. They were thinking long and hard about racing and I think if there were more than one 12 ft skiff on the rigging lawn they would have been swayed... However the volunteers had their meeting and the racing was cancelled...

GLORIOUS..!!!! Richard and I took out the Grove... It was a perfect second rig when we were rigging... Probably big rig if I had the Tristan the ton onboard, but it was second rig for Richard and I :o)
We rigged with half a dozen 13's.. A chubby, a 16 and an old 18 footer...

So we hit the water in high spirits.. Team Grove looked the goods (I wore some fancy new wetsuit pants) and were gagging to test out Richards new c'board.... We set off to the startline and boy were we worried.. The set it up right down near Lota creek... We were a bit worried about the depth... The waves were steep and the water looked brown.. Not the sort of test we had in mind for the new fin..... Anyway we smashed the start... Full power and clear air... We were in front..!! Woot woot..!!

The chop was a bit annoying as there wasn't quite enough waterline length or power in our rig to punch through it.. However we got to the top mark not that far behind Data 3.. We sent it down hill and may have caught up a little bit but the bit we caught up was lost when the kite retrieval got knotted on the drop.. We did the next leg with no real gain but we put a bit of distance on the 13's...
The next kite ride was probably the highlight... We did a couple of gybes because we weren't under any pressure and we were "a bit bored"... We came to the drop and my enthusiasm got me in a bit of trouble.... My lovely soft skippers hands got a rude shock when I went for the big pull on the retrieval line and the kite got stuck on the forestay... My hands kept going after the rope stopped... I started bleeding from my hands and on the next windward I turned to Rich and asked.. "how many times do I have to pull that bi*ch up again" and I showed him my bleeding fingers... Richie drove us to the top mark where we did a super mega ultra elegant crew/skipper swap... Richie set the kite and the wind eased... It was definitely big rig now.. Oh well... The gap between us and the 16 didn't really change and the gap to the 13's was about the same... We were just sailing for the fun of it on our own... We could feel the victory coming but it didn't really excite us... The wind dropped under 10 kts and we were one and a half stringing for pretty much the rest of the race... On lap 4 the 13's caught up a little bit, but not enough to threaten us at all.. We sailed through the finish and got the gun.. Hip hip hooray to the flying Grove..!! It was a lovely day on the water even without the crazy rides of the previous week...

The verdict on the c'board is still undecided... It certainly doesn't feel slow... But it's hard to know without other 12's around you... Next week will be the real test..!!!

Thanks Richo for taking me out yesterday.. Enjoy the win.. They will be few and far between this season... PB is on the program.. We're in it to win it..!!!

Tristan might have a few good stories from the weekend too.. He flew to Syd for his 20 year school reunion... Missed his flight home.... Ended up at the Gold Coast...
Posted by QldSkiffies at 9:38 PM No comments:

So another week goes by and another glorious Saturday of skiff racing to remember..
Finally a weekend where we didn't have to lump that crazy big rig around all day..!! Woot woot..!!
The numbers on the race track were down, but the fighting was as fierce as ever..!! The St Helena Cup looked like a fun option... HA..!!

There were only two 12's that made it to the startline.. Oh and the regular 9er sailors... Because the Northern end of the bay was being utilised by lead heads, the all boat racing was run on the Southern course... Well wasn't that exciting..!! There is nothing like running up and down the start line dodging sailboards, sabots, Sabres, lasers, puffin pacers and eggshells.. Lucky for us it was a perfect 2nd rig day so the skiffs were fairly manageable.......
There was some confusion amongst the competitors.. Ben and Craig actually started twice.. Once with the Etchels, and the other with the all boats... Tristan and I got the sequence wrong and we were a minute late..!!! What a great start to the day..!!
Since the race committee had so may different classes to race, there were two separate courses set on the same patch of water.. Gee didn't that make things interesting... I counted 11 buoys in total... Some were round and some were cylindrical... It took nerves of steel to back yourself and believe you're actually heading to the right mark...

So back to the race... The Squid boys got off the line a few seconds late, but Tristan and I on the mighty PB were way off the pace... We were too busy watching the windsurfers..... The first lap was pretty straight forward.. We just followed the leader... PB Towage made up some ground on the Squid lads and coming up the second last lap we were going gust for gust... Luckily for the Calamari clan they got their nose in to a good gust just before the lay line and were able to sneak ahead... Perhaps if our bow pole was fixed old skool it would have been a different story..... However it's not and they crossed us... Rounded the top mark and sent it.. Tristan and I got a knot in the retrieval and we thought for certain that was our day done... Thank goodness the children were racing on the outer edge of the course because the foul language coming out of our boat even made me blush.. I was just hoping those pesky 29er kids wouldn't catch up... How embarrassing! We got the knot undone and with the kite, almost at the top, we screamed down towards to the bottom mark.. That's when I heard the call from Tristan.. The Squid boys have put it in! Game on bi*ches..!!! We screamed down to the bottom mark and navigated our way around the Squid. They followed us around the final trapezoid and we finished in that order.. The Beers were on the Squid..!!!
Being gentlemen, we pulled up along side and offered a double or nothing.. Benny was quick to take us up on it, so once again we parted ways and put on our war paint.. The wind shifted East and PB took a chance.. PORT HAND BANDITS..!!! We didn't cross the Hobies but the skiffs were left in out wake.. SUCKERS..!!
The race was only two laps, so unfortunately for the Squid there were very limited passing lanes... Both boats sailed mistake free and that was that... Two bullets for PB Towage...

It was great close racing all day... The shorter courses certainly added a new dynamic.. There were gates and wing marks.. It was quite an interesting course... I don't know if I'd want to do it on a healthy 4th rig day tho... There were some great rides thrown in too.. Did I mention it was a glam 2nd rig day..?? I love it..!!
For those who cruised around the bay at 6kts in the rain.. Bravo.. But SUCKS TO BE YOU..!!!

The most promising thing I've noticed about this season so far is how close the racing is... One mistake puts you out the back of the fleet...
You have to be on your game.. But you also have to be ON THE WATER..!!! We're a month in to the season now guys.... Get your boats to the rigging lawn..!! There is fantastic racing being had, you're missing it..!!!
This weekend is shaping up to be a gem.. I can't wait to see you all out there..!!

Skinnyman
Posted by QldSkiffies at 7:39 PM No comments: