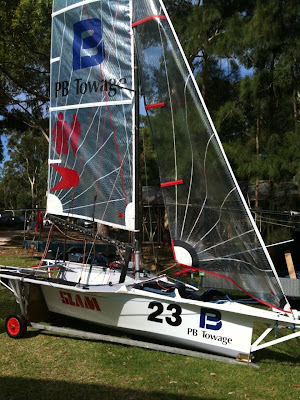 The breeze was once again from the East... WooWoo..!! Everybody's favourite..!!!
The rigging lawn had a few boats and boy was it a glorious day..!! The three 12's racing were Squid, PB and Ghetto Sled (Grove).. All three had their A team onboard and everyone knew it was going to be close out there on the water..!!
Timmy the rock star turned up and brought the footy.. Life was good..!!
The only rigging set backs were the two boat breakers that broke.. Both Grove and Squid broke theirs and had to use the trusty tuggers breaker.. Good one PB..!!

So we get out there.. It's light... Only just two stringing... EXCELLENT..!!
The start was good.. All three boats got away cleanly... Trisso and I wanted to do the port hand bandit but thought better of it when a starboard tacking hobie started on the pin.. Good one you catamoron..!! We started at the pin end anyway but on starboard.. Up the first work we pretty much stayed up the middle with the 29er.. Ghetto went right... For a few moments they looked like they had already walked away with the race they were looking so famous.. However coming back in to the mark on Starboard they went through a light patch and let us all catch up a bit.... Around the top was Ghetto followed by the 29er and PB then Squidgee bringing it up the rear... (You know exactly why I asked the question Benny..)
Downhill the Squid lads threw in a cheeky early gybe.. Ghetto saw this move and gybed too... Shame bro..!! Both boats sailed in to the sick easterly while PB screamed to the layline and with one gybe they were in their rightful place.. The lead..!!!
It was quite close at the mark between Ghetto and PB.. Squidgee were a bit further behind but not out of the race just yet.!! The sled was pointing like a 5o5 and making good ground on PB who were hunting air and 1 and a half stringing... However the skipper of the sled got a little excited through a tack and snapped his tiller... Rookie error... There was a capsize in there too somewhere... I wasn't really watching... I just knew they were tacking... It was left to the Squid boys and PB to bring home the bacon... We did just that, and finished in the same order... PB had an interesting final gybe under an eggshell but survived..

Race two...
The wind had picked up a bit.. Woohoo..!! Ghetto had gone home by this stage so it was just the Squid boys and PB out there.. Match race..!!!
PB started well.. We just dumped on Squid. Easy. We just kept the 29er and Squidgee in check the whole first beat.. Around the top and up went the big kahoona.. We drove her like a rental and sent her to the bottom mark... The Squid boys were like a shadow.. Just following us waiting for a mistake.. Their patience paid off when PB prawned at the bottom mark... Squid dropped their kite and rounded inside PB... The Tuggers got the kite in and got settled for the chase..
We caught up to the squid boys and Tristan and I decided that we weren't going to beat them by following .. We tacked, Squid covered.. So we tacked again.. Squid covered.. This sparked excitement onboard PB... Old school tacking duel..!!! BRING IT..!!! We played the game for a while.. It was great..!! But Benny got over it and stopped covering us... Good call. We sailed in to a hole and all that hard work we did to catch up was undone.. Bugger..
The Squid boys sailed faultlessly to victory with PB in second.. Good job boys..!!
It really shows that consistency is crucial to 12's racing... You can't win if you stuff a tack or a mark rounding.. Not in this fleet.. Well done boys, and yes it really was another fantastic weekend racing the best boats on the bay..!!
Posted by QldSkiffies at 6:50 PM