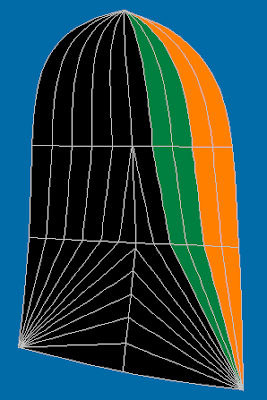 Morning Ladies
Race Report from the front of the fleet.

Forecast was looking distinctly minky all week, with rain and no wind predicted. When the morning came around, we were met with a drizzly crap-looking day, but 10-15knots SE!!! I raced home to get the second rig as i only took the big rig to the club.

Race 1: The first start was a spectacle, with 4 12ft skiffs and a 49er all hitting the line with pace. nothing in it, but the ghetto blasted off the line to gain a handy lead heading out towards Green island (the one in brisbane, not Cairns). Heading up towards the top mark, Spiesy and John with their wind-streaked 3rd rig, gained some height as the wind freshened a bit, closing the gap with the sled. The tuggers, with superstar crew Robin, struggled for pace with the extra 25kg of the ton playing with little childen (at his daughter's 1st birthday party you sicko's). The Squid was in 3rd.

Around the top mark, it was the 49er by 100m, then the sled, then 50m to the Speez, then the squid, then tugger.... behind (i think there was a splashtack in there too).
The fine crew of the Ghetto Sled threw their new kite up and sent it. driving it like we stole it, a 200m gap opened up between 1st and second. John must have been swearing as pre race he was mouthing off about how it was going to fill in to 3rd rig. Round the mark another sharpish display by the sled, to maintain the lead and cruise around the next lap, barely headed by anyone. Stopping the clock at around 40mins, we waited for an eternity (8mins) for the Tuggers to limp across the line. Spisy 2nd, Squidgy 3rd.

Race 2: 15deg easterly shift between races and no-one (except the brilliantly-gifted sailors on board the Ghetto sled) picked it. Pin-end on port "BANDIT" start.!!! Crossed them all, 49er included (i thought they were training for the Olympics). 50m lead turned into 100m by the top mark. Overlayed the bottom mark as the wind shifted south and the Squid this time were right on our hammer. The wind had eased a few knots, so the Speez was back in third. Tuggers floundering back in 4th, their hopes of a Summer series wind floundering with them. Round the mark and the gap opened up again between 1st and second, though the Squid found a new high gear and were still pressing hard. Round the top mark and the Ghetto danced away from Ben and ... well Dancer. We gybed when a big southerly shift and pressure presented itself and nailed the finish line angle by luck. Sailing lower and faster, the gap opened up once again for a comfortable win to the Ghetto Sled.!!

Derig in the rain, but it was OK. 2 wins in a day makes it all good..!!! The rum (thanks to skinnyman due to the colder weather) was sweet.
Posted by QldSkiffies at 4:56 PM