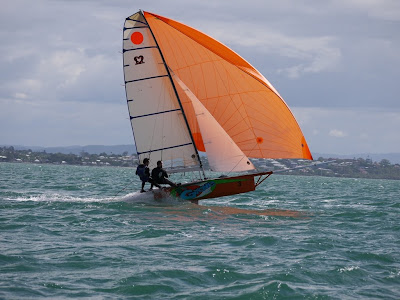 What started with a slow drift around Green Island (not the one off Cairns) ended with a crankin 3rd rig in the steep waves of Waterloo Bay. The 76th 12ft Skiff Australian Championship was won by Nick Press and Brad Yabsley on Dimension Polyant Australia with only a small margin to last year’s champs Brett Hobson and Alex Johnson on Garde. The 1 point win capped a great season for Press and Yabsley after winning the Interdominions early in the new year.

Race 1 was a round-the-island race and despite the soft big rig wind, the racing was tight with only0 5 minutes separating all 20 boats. Clear air was key and the Garde, after taking the lead from Dimension and locals Ghetto Sled about half way around, made the most of the small gap. Friday night festivities included an informal bbq at the wonderful Yachting Queensland facility and some shenanigans from the young lads with the Hobie 16 fleet under attack.

Race 2 and 3 were postponed to wait for breeze and eventually got under way in a soft 2nd rig wind with the forecast 15-20 only turning up on the last lap. With an extra wide wing mark, crew work was put to the test with extra kite hoists between bursts of 2 sail reaching. Lachie Paramor had a blinder in the first race of the day, pulling 3rd place and showing great speed. Equally impressive was the 4th to PB Towage from Queensland in the second. Dimension took the first, Garde the second, but a 5th in the second by Dimension had Garde leading the regatta after 3 races.

The forecast for Sunday was a healthy 15-20knots from the South East. 2nd rig was the call, however the breeze failed to fill and the fleet were subjected to a soft ride barely pulling 2 strings all day. Racing was tight with mistake-free sailing important to stay in touch. Dimension Polyant pulled 2 bullets in the trying conditions, followed by Gardein the first and Brendan Matthews in Allwood sails in the second. New queenslander, Michael Spies in Andrew Short Marine took a 3rd and Vantage real estate in their new boat a well earned 4th. Gemmell Sails, having a very consistent regatta with the recent teaming of Murray Press and Damian Vlotman took a 4th. Ghetto sled came into form posting a 5th.

It took until race 6 for the bay to finally prove its world class skiff venue credentials by putting on solid 20kts South East breeze. The seas were whipped up and the racing hit another level of excitement. 3rd rigs were donned and there were battles throughout the fleet. Wave ramps were set as the 12s took to the sky! Starting very sharply were the queensland boats with a 1st, 4th and 5th around the first mark. PB Towage led the charge to the wing mark, then dived underneath it after a bit of a right of way disagreement. Dimension and Garde surged on with Allwood Sails and Ghetto Sled and in pursuit. These 4 would hold their positions to the end, but further back in the fleet, battles raged. The Squid, sailed by Ben Guymer and Craig Dancer showed good pace to lead the chase pack for a while. Lincoln Crowne found a watery place to rest during a kite hoist and Cunning Stunts, Vantage Real Estate, Gemmell Sails and Foxy Lady 3 all fought for supremacy. Meanwhile, PB Towage, having swum around at the first wing mark for a long while, got back on their feet and were blasting around the course. Meanwhile, Geotherm and G Unit had a brief touch resulting in G Unit’s rudder pod being ripped in half and ending their day. Lincoln Crowne overcame their swim to fly back into 5th, with Gemmell, Squid and PB Towage following close behind.
Consistency from the top 2 boats gave them a healthy points gap to 3rd. Garde didn’t finish worse than 3rd all weekend and Dimension Polyant dropped a 5th.
After a poor start to the regatta, Allwood Sails took the most handicapped award and Gemmell Sails and Cunning Stunts took the Veterans and Juniors respectively.

A great finish to a fun regatta on the bay. Thanks to all the organisers and supporters.
Richard Billet (Ghetto Sled)
Posted by QldSkiffies at 10:38 PM