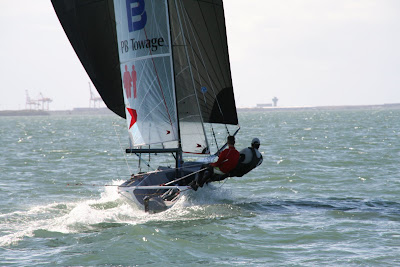 The rigging lawn was like a garage sale.. 18's sprawled everywhere...
PB was the first to arrive and got the best parking spot under the tree and next to the picnic table.. Mmm picnic.. The rest of the 12's arrived and the general comments were "where the f@ck is the wind..??" The forecast was for 15-20kts but there was nothing out there but a light westerly... Damn..!!
The 18's threw in their usual little rigs and three of the five 12's put in 2nd rig.. PB and ASM grew some balls and took a chance putting in big rig... PB forgot their kite (we brought down two 2nd rig kites) but were able to use the big black Grove kite.. Ooooo

It was a slow mission out to the startline... The race was postponed and well.. There was no fricken wind... Big rig was looking like a good call..!!

The start was slow.. Squid tried a port hand bandit on us.. Rookies.. Ghetto went right with Allwood Sails.. ASM and PB trucked left... Squid were somewhere in between... I believe ASM were actually going for the wrong mark.. Because there was a lot of screaming around a random red mark... I never heard the story there..
With all boats struggling for pressure, combined with the marathon course set for the 18's, it seemed to take an eternity to get to the top mark... ASM got there first I think.. Followed by Ghetto and Allwood.. PB were next with Squid bringing it up the rear... Good effort for those with 2nd rig in..!! Tristan and I couldn't even pull two strings with big..!!
The race to the bottom was on... The boats with big rig were feeling pretty confident we could take these 2nd rig hacks.. Alas poor Yorrick Ghetto still showed superb speed with that new kite and held in.. The bottom mark rounding was ASM,Ghetto, then PB, Allwood and Squid.. The wind started to fill in a bit at the bottom mark.. Woohoo..!! 2 strings..!!! It kept filling... It was probably a comfy 2nd rig now.. We knew this because our big rig main was flagging quite a lot.. We went right trying to chase down the Ghetto Shed.. (They went left) Game on..!! Then I heard Tristan yell "Away Skinny..!!" I had no idea what he was on but then I heard a Dugong take a breath and then hit our c'board... Oops..!! We sailed on.. Thinking that was close.. The breeze had set in and it was top end big rig... We decided to pull up some board in the next tack.. We threw in the tack and Tristan couldn't budge it.. The Dugong impact had put the board through the back of the case.. Bugger..!! We stuffed around with it for a bit before giving in and going back to racing.. We lost places to Allwood and Squid so were back in 5th.. Ghetto had stretched their legs a bit and were looking solid. The top mark was Ghetto, ASM, Allwood, PB and then Squid.. Not much in it really.. We stayed in that order to the bottom mark.. Squid had a nice little swim at the bottom mark I believe.. The next windward saw Allwood Sails have a crew malfunction.. Joel blew up..!! So they had to retire.. It was a marathon course... The top mark rounding was Ghetto, ASM, PB and Squid...
We had plenty on with big rig now and the gate course was proving to be interesting.. It was tight getting from the gate to the bottom..... We had to drop a bit early.. Ghetto was around the bottom first, ASM had kite issues after their gybe drop.. Uh oh.. PB caught them and almost slipped past.. ASM just managed to squeeze up and kept their nose in front... It was a quick up and back from there so much fighting to be had... Ghetto had a handy lead now and just had to sail safe and loosely cover the fleet for victory.. The battle for second and third however was epic..!! It all came down to the last tack going in to the top mark.. ASM got there first but had a sloppy tack.. PB slid in and got around in front... We could sniff a state title victory..!! Soo close..!!! The halyard went up.. Well sort of... It was tied to my trap line..!!! I struggled with it for a while with Tristan steering.. I finally got it undone but ASM were again right on our heels... It would be a fight to the finish.. PB had enough boat speed to hang on.. Final standings were Ghetto Sled, PB, ASM, Squid and Allwood DNF...

The race took 1hr 35mins and all crew were pretty exhausted..

The second race was a sprint race with only 3 skiffs taking to the line..
Ghetto got off well as did Squid.. PB were way off.. Fools..!! We did manage to roll 2x 18's though :o)
The two boats with second rig flew to the top mark with Squidgee just edging out Ghetto for top mark honours.. They held on and just managed to get to the bottom mark in first... Ghetto tacked off early and Squid didn't cover... Ghetto got a nice little puff and took the gun.. Squid got second and PB 3rd..
A second and 3rd were enough to take the Championship.. Woohoo..!!

All in all it was a fantastic series with fantastic QLD Easter breeze.. All of the QLD boats are showing nice pace and we should all feel pretty confident going in to the Nationals..
Bring on Friday I say..!!!
Posted by QldSkiffies at 8:23 PM