Well didn't Brisbane turn it on for the first race of the season..!!!
The sun was shining, the birds were chirping, and PB Towage was flying..!!
Even with the less than inspiring forecast, there was still much excitement amongst the troops.. 5-10kts increasing to 10-15kts through the afternoon was what we hoped for... The smoky haze from the farmers back burning tried to beat down the sea breeze, but it had no chance.. What we got was a perfect QLD big rig day... 28 degrees, and 10-12kts from the NE...
The rigging lawn looked a picture.. With 12 sailors grinding, drilling holes, and 18's being put together with rubber mallets..!!
It was good to see Timmy and his wife Megan make the trip from Warwick to be there.. Watching his face contort when Richard asked if he should put in second rig was priceless..!!
Once the starters arrived it was go time.. A short and sweet briefing was held, and before we knew it we were hitting the water... Aboard PB there were smiles all round when the new centreboard went down for the first time.. The familiar sounds of the water slipping along her narrow sides were somewhat comforting, and both skipper and crew were quite excited about their first sail..!!
The bay was gorgeous.. The water was crystal clear and the breeze was trying hard to keep us both on the wire.. Heading out the leads was quite the 12's procession.. Ghetto Sled and the boat formally know as ASM not far behind us, and bringing it up the rear was the Mighty Flying Animals..!! It was their first time out and what a cracker of a day it was for them..!!
By the time we got to the starting area the breeze had come in to a very comfortable two string big rig.. Tristan and I did a quick upwind beat and set the kite.. We just wanted to blow a few cob webs out.. We got to the startline and the sequence commenced... ASM were the only boat to get the timing right.. Tristan and I couldn't understand how we got our timing 30 seconds wrong but we did... Richard was even further away..!! Fortunately we were not far behind ASM and just followed their lead... Port tack bandits..!!!!
ASM and PB shot off on port tack towards the RQYS fleet.. Richard and Timmy went left... Boy did it pay.. ASM and PB tacked to join them and when we all came together it was PB, Ghetto and then ASM.. PB had played with some strings and found a magic 5 degrees of height..!! You could throw a blanket over us... The Flying Animals were there too, but missed the start due to joy riding... It was their first kite ride.. I'm not going to judge them..
So to the top mark we stormed.. Around first was PB.. Close behind was Ghetto and ASM. The big kites went up and we headed down to the bottom.. The smoke made it difficult to see the bottom flag but we managed.. The order didn't change and we rounded the bottom mark.. ASM tacked off straight away and PB covered.. Ghetto tacked once he was clear of our line and again the three skiffs were heading left.. Ghetto was first to tack again.. It was a brave move as there was definitely less air up the middle.. However he had to throw something at us as it was the last lap and PB had speed to burn..!! Unfortunately for them it didn't work out so well, and they slipped back to 3rd behind ASM. A pretty straight forward run to the finish and that was race 1... Actually there was some more drama... Ghetto snapped a back stay halfway down the last run so finished their race with white sails only. The Flying Animals were zooming around too.. They had a costume malfunction and only had one functioning trapeze harness..
Race two started with the now too familiar police siren, and once again PB had stuffed our timing..!! We were miles off this time.. I have no excuses other than we are muppets.
As Ghetto didn't want to drop their rig they headed in after the start.. The two skiffs headed straight left.. PB had given ASM a handy head start, but with the height and speed we found in the first race, we had caught them by the corner. It was PB around the top first followed closely by ASM... The Flying Animals were charging too, but with only second rig and one trapeze (cherub style) they were off the pace.. The wind had kicked up a knot or two and was super comfy.. The gybe is where ASM made their move.. They gybed first and PB over laid.. Damn..!!! ASM got the the bottom first but PB dropped quicker and came charging up from behind... We ducked ASM's transom and shot off low groove to leeward.. We cleared our air and got back to our super setting.. We tacked when ASM tacked on to starboard and by the time we got to the left corner we were well clear. Around the top again it was PB followed by ASM.. A casual run home followed.. The finish boat was MIA but we got our times.. ASM looked like they had a great ride up the leads.. With the woof on it's ear, and the kite peeling slightly it was pretty awesome to watch... Terry, you would have loved it..!!
Well done to all of you who made it out there... Sucks to be those who didn't.. What a sensational way to start back up.. The off season is over lads..
It's time to see you ON THE WATER..!!
Cheers
Skinnyman
Posted by QldSkiffies at 6:11 PM 1 comment: 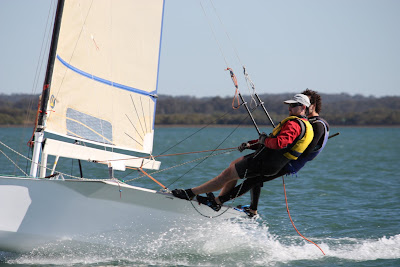 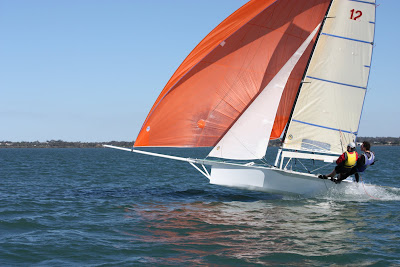 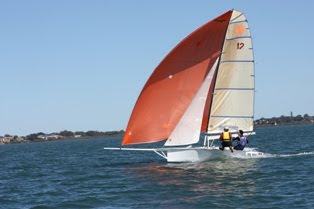 Opening day on the Saturday turned out 25-35knots from the west and 10deg. A unholy mess in our bay and though 4 boats showed up ready to rumble, none decided they were prepared for a beating which may result in floating out to sea. So a day spent on maintenance ensued.
However, Sunday was a nice 15knot westerly. Still unseasonably cold, yet bearable. Only Ghetto stayed around for the DPSS race and was treated to some fantastic 3rd rig sailing, with a smaller than usual newbie crew. After a bad start, we caught the lead 13ft skiff by the first bottom mark and held it for a lap before missing the puff of the day on the second last run to be trailing by a few boat lengths at the bottom mark. Some smooth work and good boatspeed pushed us past them to secure the gun.
I think this photo says it all. More action shots to come. 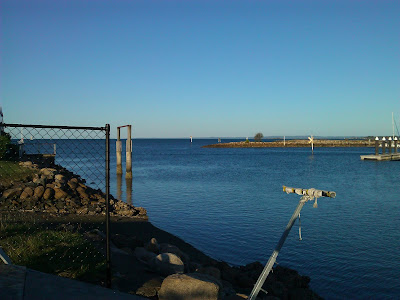 Posted by QldSkiffies at 4:55 PM No comments: 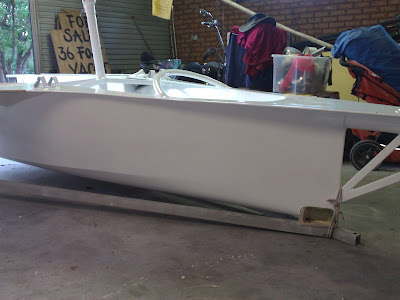 Posted by QldSkiffies at 12:04 AM No comments: 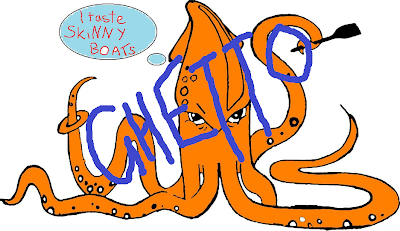 Posted by QldSkiffies at 6:47 PM 3 comments: