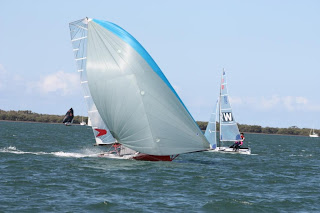 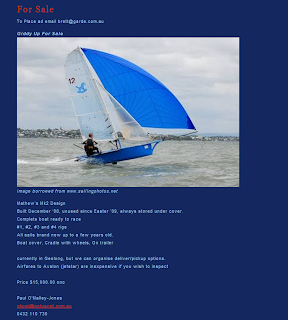 $15k!! Absolute Madness..!! This boat has only sailed 1 season. It's race ready and primed to make mincemeat out of the fat boats. Someone buy it before I do.

Posted by QldSkiffies at 4:21 AM No comments: 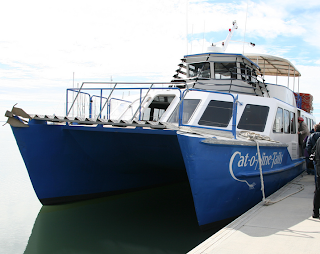 On the 12th of November, a spectator ferry will be taking passengers out onto the course to watch the 12ft and 18ft skiffs go at it. It will be pulling into the DPSS 'ferry terminal' at about 1pm.
Posted by QldSkiffies at 9:32 PM No comments:

No 12 Racing due to St Helena Cup

Posted by QldSkiffies at 12:34 AM No comments:

Wind surfer girls on lawn at RQ, mot much attention paid to weather.
Brad I went out with 2nd rig plugged in….
White caps in the harbour, briefly thought about turning around.
Beat out towards Green Island with plenty on, finally decided to call it quits. 2 sail reach back  in at pace with multiple mines/capsizes.
Finally made it back in after coping an absolute hiding from a sweet 3rd rig breeze.

Moral of the story: get 3rd rig ASAP and don’t rig up beside the wind surfer girls.
Posted by QldSkiffies at 8:05 PM No comments:

Crazy kids
http://www.youtube.com/watch?feature=player_embedded&v=R5TIRhZ5Kos
Posted by QldSkiffies at 7:57 PM No comments:

A little vid from last week

The only 12' sailing on Saturday was the Flying Animals out training.
I hear they had moments like PB Towage a couple of weekends back!

Posted by QldSkiffies at 10:31 PM No comments: 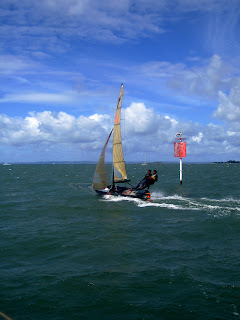 The 8am thunderstorm scared almost everyone away from the bay but by lunchtime there was a steady 10kt NW breeze and glipses of sunshine. Terry "million dollar man" Ellis with his brand new knee took the reigns of the Ghetto Sled and Ben got out of bed on the right side after a heavy night of drinking and debauchery. A dissappointing turnout for the days races. Skinny made the call to take his RL24 "Sportz" for a gin cruise rather than pull his harness on. Rumour has it he pulled the pin on that and ended up being dragged through the shops in trendy "the valley" looking at blouses. B-Mad forgot about his formal (who holds a formal in skiff season) and had to pull out at the last minute. John and Spiesy got scared by the rain and another defeat at the hands of a skinny boat.

Down at the club, the only 18 to show up was considering abandoning and then gave in after realising the "junior" fleet were heading out. After a 30min kite ride to the start on the other side of the bay, we got underway, big rigs trying hard to get both crew on trapeze. About halfway up the long first work, the breeze battle began. The forecast SW breeze filled on the left side of the course and the NW was on the right. We were in the middle. Terry learnt that balancing a skinny 12 with big rig and no wind is quite a challenge and his knee felt the strain after a few "dives" across the boat. We got to the NW breeze eventually after trading the lead with the Squid for a couple of Nm. They snuck around the mark first and head East. We got to the mark courtesy of the SW breeze (yes it was swinging that much) and headed South. Then the breeze died again.... and came in from the EAST..!!!! The only place it hadn't come from all day. And the only place it wasn't forecast to come from.

Therefore the Squid walked away with the win and the Bert Squid remains in the fleshy tentacles of its previous title holders. The 10-12kt Easterly gave up on the way home and we de-rigged in calm. CrewBen must have felt sorry for taking such a solid, hardfought victory so bought rums for everyone. Much appreciated.

Next week the wind shall blow and the battle for supremacy of Waterloo Bay will continue.
Richard
Posted by QldSkiffies at 6:48 PM No comments: 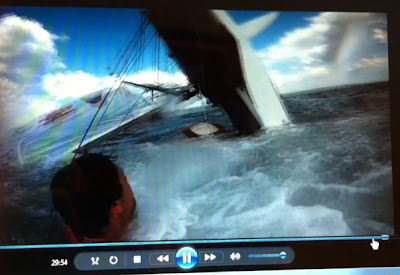 This is a photo of a photo of a screen so that's why it's soo blurry... Wait and see the actual footage.. It's pretty good..
The forecast was there... Did anyone listen..?? HELL NO..!! The 18's went big.. We had a delightful NE breeze blowing and we figured we could probably handle the Westerly if it came in with 2nd rig.. Hmm
So we launched.. Video footage will show Tristan and I were pretty nervous... Something crazy was going to happen... It was just a matter of when.. We slowly made our way to the leads.. That's when the wind dropped out to 0kts... Excellent... It was coming.....
We sat there for about 5 mins.. Looking behind us we could see it coming... Slowly it moved it's way towards us, a black shadow swirling up the water.. We watched as boats behind us went in to crazy round ups... It took out a few cherubs and an 18... It was coming... We watched it creep towards us at a tediously slow pace... Talk about getting your heart rate pumping... We were in no wind at all yet boats 60m behind us were upside down... We manoeuvred the boat in to a good position for when it hit... Up went out big black kite and we waited... Not for long though... The breeze hit us like a freight train... We both jumped out on the wire and took off... We shot out too fast and found ourselves ahead of the breeze... Damn... It would catch up again and we'd shoot off... After a couple of times of this happening I just sat in and let Tristan go out alone... I saw the footage from the head cam and we were absolutely smoking..!! It's really weird to see.. There were absolutely no waves yet we were hitting warp speed.. I look forward to getting the video footage edited so you can see how cool it was..
So we flew down to the start boat and dropped the kite... We sat there for a while waiting and watching the other skiffs head on down... All the 18's were on their side, so it was mainly the cherubs just coming down... Richard and Jimmy looked like they were having a sensational ride.. They went straight past the startline and were headed for king... Nice send boys..
The start was delayed.. So we pottered around.. It was getting difficult to even just sit still out there as the puffs had balls..!! We slowly crept our way up the course.. We saw the squid boys and agreed to keep racing.. We then decided to head back down to the start boat... Both of us on the wire, no jib and no main yet we were still getting smashed.. Jeebus..!! We waited for a lull and then went for the bear away... The little skiff took off like a rocket..!! She sent me flying off the back and at the same time Tristan dropped the main.. This caused the nose to dig in, I stopped flying backwards and started going forwards..!! Excellent two sail mine... The footage is not too shabby..
So we pull her up and start off sailing again.. The wind might have picked up a bit because we got blown straight over without any sails on at all... We were close to the leads and after a quick discussion we decided we probably had time to do a mega quick pit stop and change down to 3rd rig... The start boat hadn't even started moving for the new course so we figured we'd almost have enough time.. So we headed in.. Did the change and as we were launching we heard that the race was canned.. Oh well, we had come this far.. Lets go for a send..!! So we did... We waited for a lull in the breeze and then headed off... Goose swinging down the channel made me somewhat nervous, but we got through... We noticed the tackline was on the wrong side so we put it in the piss to adjust.. I quickly retied it and we were back in the game... A little squirt to settle back in, and then the bear away.. The little kite went up... She didn't actually look all that little to be honest... Tristan joined me on the wire and we took off... Boy did we take off... The boat was hauling ass..!!! She felt a little sniffy so Tristan tried to move me backwards.. I yelled at him.. I was already well off the back and holding on to him for dear life..!! We were scooting and got hit by yet another black one... The acceleration was too much and with a hop, skip and a jump we did an enormous cartwheel..!!! Tristan and I were thrown like rag dolls.. We skipped across the water like a smooth flat pebble.. Biggest crash either of us have ever had in a 12.. IT WAS AWESOME..!!!!!!!
We swam back to the boat and tidied things up.. We pulled her up and as there were no breakages we decided to not try our luck and headed in for a beer...
All in all it was a big day for not a lot of sailing... More rigging than actual sailing..
PB had a headcam onboard and once I work out how to edit the video footage I'll get it online.. We decided not to use it when we went out for the second time, so the massive crash didn't get filmed..
Next week will be better guys.. I can feel it in my waters..!!
Cheers
Skinnyman
Posted by QldSkiffies at 6:28 PM 1 comment: