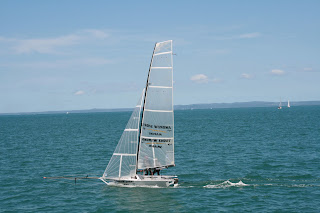 A beautiful day greated the 12's fleet on saturday, the forecast predicted a glorious 2nd rig out of the north east. 5 12's and one chubby were on the lawn plus 3 18's. We were also treated to a new 12 on the water, a laidback fella who introduced himself as Brendan! Skinny and Tristan were absent (not cool!), Tristan was working (fair enough) and Skinny was appently getting a manicure, getting a waxing for his lady-parts and then doing some antique shopping (nothing "man" about a manicure). Terry and wayne sailing for the first time this season got rigged first then sat down with some sports drinks and planned there attack for the afternoon.

Sailing out I think we all came to realise that we may have chosen the wrong rig, big may have been order of the day.

Race 1: Started in marginal conditions, the boatformally known as ASM, fat controller and squid went left. Squid tacked "early" whilst ASM and fat controller kept going left. We identified a top mark but it was the 18 mark, I can't say what was said on the boat when the right top mark was realised but it wasn't, well, nice. Around the top mark was Squid followed by Fat Controller and ASM. I believe terry was around next followed by the chubby and richard bringing up the rear after missing the start? Squid went on top score a well deserved first place followed by ASM after getting ahead on the run of Fat Controller in 3rd. The battle for the minor places was intense, with (correct me if I'm wrong) terry and wayne followed by richard just sneaking ahead of the chubby (that would have been interesting).

Race 2: Well the breeze didn't kick in as predicted and turned out to be as popular as a ginger-headed step kid (yeah I know, but it was funny the first time I heard it). A good clean start with everyone favouring the boat end (cept the new guy Brendan and his rockstar crew, they went home after the first race). I have to admit I'm loving the shotgun starts, sounds way better than the horn even if they do fire it a few seconds late. Everyone started going left as thats where the breeze was all day, lot of chop out there too. ASM took an early lead, squid tacked off about halfway up (bad move brother) that left terry and ASM heading left till the layline. Around the top mark was ASM followed by terry (whooooo) then squid, ghetto sled and the chubby. Finsh results were ASM, Squid and Terry, the rest of the race was about as spectacular as listening to skinny talk about the latest fashion kids are wearing and therefore not worth reporting. It was good to get a win finally, mr spies is rather pleasant when we get a win.

Ride of the day as usual was the ride back in, squid took a tumble in the channel and decided they couldn't finish on that note and went for another blast around the bay as the breeze looked like it filled in a bit.
Posted by QldSkiffies at 4:08 PM