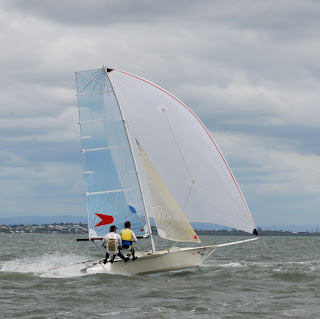 Well it was a nice weekend for round 2 of the club championship and the only thing missing were...skiffs!
Only the Flying Animals crew in Challenge and the Squid boyz in a new Diet Squid (aka Allwood Sails) headed out in what was probably the best weekend of the season so far.  Everyone else was getting their hair done for christmas.
It was 20-25 SE and pretty lumpy.  The BMMK2 sure aren't woofs and probably aren't even boats. We hit green (not the one off Cairns) before we worked out how to turn it around and went back to find the start boat as it dragged anchor across the bay.   No sign of the animals guys at this point but the flag was up and Terry sent us off for a one lap sprint.  We worked our way up to the top mark (nah that's the pin end keep on going!)    The skinny not boats feel strange but definitely quick through the chop upwind until...damn those tacks need a bit of work!  Bow up tail down me head near foot near transom under Ben all wrong in the piss again...F*&K!!
And around the top mark and bloody hell that self launching pole is only self launching from the Skipper's point of view!! But the...WOOOT... the kite was up and we were on for our first skinny not boat ride...WOOHOOO tail skipping and yikes gybe and WOOHOOO and flag the kite a bit and FINISH!:)
Well one lap ain't an afternoons workout so up we headed again for another lap around the bay.  Starting to settle in and look the tail doesn't sink as much as we thought...SPLASH we were doing pretty well...SPLASH...as we tacked and then WOOHOOO another ride but this time the SPLASH didn't go so well and then WOOHOO another ride but damn those gunnels of Brendan's are slippery and oh boy that's a HUGE mineshaft and I'm flying past something breaking a backstay oh shit Ben that is my hand where am I??
And time to head in on the death angle oooo another big mine and boy I was STUFFED when we got back in!
I think the animals guys got some good mines too but I was too knackered to remember the details
And the Skinny not boats... Well it was hard work and I'm not sure it was all exactly what I'd call fun but on Sunday all I wanted to do was...have another go!!!=D
Merry Xmas and Happy New Year Y'all...
PS Thanks heaps Brendan! (Sorry about the bits...)
Posted by QldSkiffies at 10:27 PM No comments: 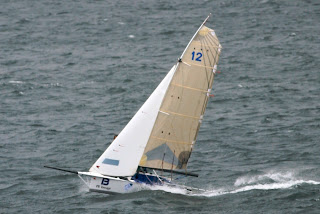 Posted by QldSkiffies at 7:51 PM No comments: 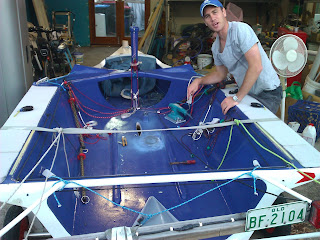 Posted by QldSkiffies at 4:15 PM No comments: