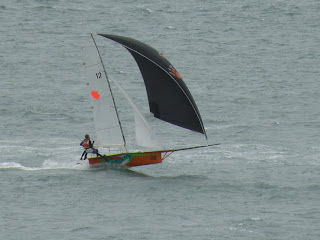 After a slow start letting the yokels have a clean hometurf getaway, Ghetto powered off to the right side of the course, chasing flat water. The 4th rig allowing us the freedom to throw it around and sail clean... at least that's what we thought until the wind started piping in at up to 25kts just before the top mark. We went round with the 13s and a couple of 16s just in front. The red 16 went into their bearaway with a bit too much vang on, and their backstays ripped the Tball fittings straight out of the aluminium tube.!!! Rig Down. T-balls strike again. The Ghetto cruised round avoiding the pile-up and threw the little black kite up. Once Ben was out we sent it hard, chasing down the lead 13 by the gybe. He managed to roll inside us and run a bit higher to the bottom mark. But shooting high held a high price with them splashing before they made it. We pushed hard but as flyweights, the kite was almost collapsing we were running so deep. We got the speed wobbles as the kite came down, so a quick swim followed.  Got her up then 2-sail, 2-string at death angle to the bottom mark. I was having flash-backs to GTown. Unlike GTown, the skinny hull drove deep down a big set, Volvo70 style spray everywhere and when it powered up again, we rolled over next to the bottom mark. My charter ride, the Tradey smoked past us with no kite yelling "Now it's really windy!!" Cherub with no kite?? it must be windy. Back up and racing and we were now chasing the remaining fleet. 2x 16s and 2x 13s. The sled was sliding uphill smoothly, with height to burn over all comers. We chased hard and gained some ground by the top mark.

The wind had eased back to 15-20 by now and the next run was a dream. A quick set then sending it hard.!! The waves had built on the left of the course with the squall and we were leaping high and coming down tail first. High speed in the flats, then LAUNCH!!. Some nice smooth gybes, then send on its ear round the bottom mark again. More of the same up the 3rd work, but had to stop to retrieve the kite sheet from around the CB. Gave up chasing the other skiffs, so we tinkered with the tune to try and get more out of her. The little main blades like a Schick, so there wasn't much more to tweak.

3rd run was more of the same speed and launching. Had some Sydney harbour traffic dodging practice and came out unscathed. The creases from a few weeks away were ironed out by now and we were working the boat hard. Final beat and run and the 4th rig was coming into its own. We would have been destroyed by the 3rd rig by now. We skated down to the bottom mark for the last time then made a quick beat to the finish.

The rides were the highlight of the day. There's just something about the hull leaving the safety of the water for a moment that makes your heart stop, then race as it slaps back down and you regain warpspeed.
Richard
Posted by QldSkiffies at 5:47 PM No comments: 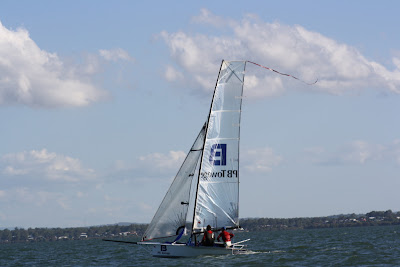 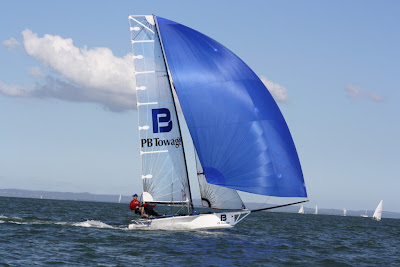 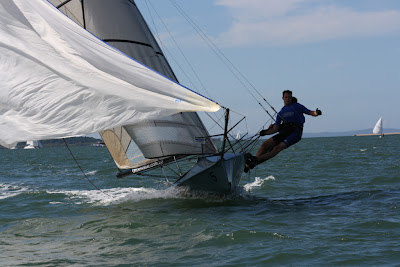 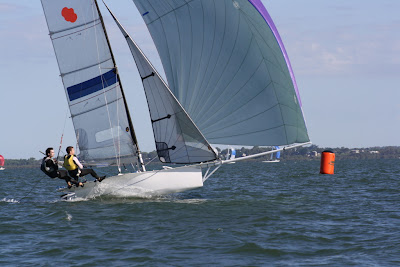 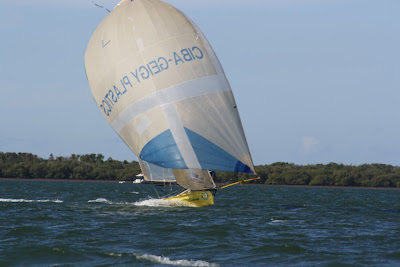 Posted by QldSkiffies at 7:58 PM No comments: 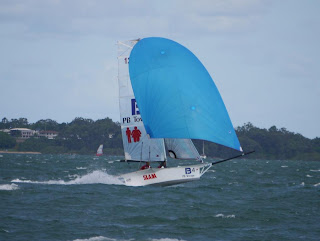