Sorry it's taken so long for this race report to come out.. I was busy here at work.. Hard to imagine I know, however the truth hurts...
So what a hyped up weekend of racing it was..!! It was the Jean Reid memorial on the line with a side of cup cakes..!!

The rigging lawn was hot hot hot, and not because there were four 12's rigging on it... The sun was out in full force and there was a sick Easterly blowing... PB rolled in last.. I rocked up to Tristan's place and he was mid way through his sports drink of choice, a Crown Lager..!! We get to the club and were rigged before any of the others... Good job Tris..!!
Suellen thought a bit of media coverage would be good for the class so Richard nominated me to wear this fancy camera thing... It was mounted on my enormous chest, and although I'm yet to see the footage, I dare say it will have pretty much just looked at the rig and the sky... I hope Suellen edits the sound as Tristan and I had some pretty interesting conversations during the day....!!

So we launch.. Spiesy and John hit the water first... The Andrew Short Marine looked fast for a fat boat.
PB were next and entered the water with style.. Squid got halfway out the channel before heading back for something.. Useless.
Team Grove were early favourites with super crew Wayne stepping in for Timmy therefore halving the combined crew weight..

The first race start was a shambles..!! Although all 4 twelves got across the line alright.. It was those pesky 5o5's pushing hard and causing a general recall... It was soft to mid range big rig so Tristan and I were not too disappointed as we figured the extra time we took to restart might bring a bit more breeze... It didn't really..
So we were off.. PB dumped on Squid but got covered by some crazy pointing contender so we tacked off with the Squid.. We hit the right hand side of the course with Andy short and Grove going left.. When we crossed, halfway up the beat it was Andy Short in front followed by PB and then Grove... By the second crossing, Grove had us but you could throw a blanket on the three of us... Squid were out the back preheating the oven.
We went around the top mark in that order.. PB did a cheeky gybe and took an inside lane with some pressure... It paid off and we picked up the Grove boys... Spiesy made the rookie mistake and started dropping his kite at the contenders gate marks... He realised quickly the error of his ways and pulled it back up... They were still ahead but only just... John dropped the kite about a thousand meters too early and PB slipped in on the inside... From 3rd to 1st in one leg.. PB were feeling pretty good..!! Just quietly..!! We sailed in to a hole and that was the end of that though..!! ASM and Grove both passed us and we were left searching for pressure... It was still very close coming in to the top mark... ASM and Grove went out to what looked to be the layline but PB got a little puff had a crack at some stupid inside layline... We were pinching like crazy with Tristan on the bow and I was half swinging.. It was slow but high.. We managed to cut the corner by enough and get in front of the others..!! BACK IN THE GAME..!!! BRING IT..!!!
So we set the kites and sent it... Boy was it intense... We covered ASM all the way home and managed to keep just enough separation to keep our breeze.. Good job to all those racing.. I think it was 27 seconds separating 1st and 3rd.. 4th placed Squid were discussing recipe's..

Race two was a good one too..
Same breeze.. Low to mid range big rig...
The start was crazy, Squidgee got caught up with the "all boats", Grove turned around and went back for an individual recall.. PB and ASM soldiered on and had an epic battle right around the track... The lead didn't really change with ASM covering PB, but there was pressure being thrown left right and centre..!! On the last up wind leg PB made some big gains with ASM struggling to stay in the groove, but it wasn't enough to get past them.. Again only seconds separating the two boats at the finishline... Unfortunately for PB there was a controversial OCS so no points for them... It's a shame because they truly did sail out of their skins on Saturday... It's a shame Grove and Squid had kite issues in the second race, however having 4 such competitive boats on the water was just brilliant and I am gagging to get back out there next weekend.. Well done to Spiesy and John for their effort and I hope you guys keep racing each week because with this level of competition the QLD fleet will just get better in leaps and bounds..
Next is to get Marc and Brendan on the water STAT..!!!
Terry hurry up and get your knee fixed.. There is lots of fun to be had out there..!! It was a perfect day on the water... Although I really really really am looking forward to a solid 3rd rig day.. We are well and truly due for one..!! Damn it..!!

Keep it real and I'll see on next week
ON THE WATER..!!
Posted by QldSkiffies at 10:34 PM No comments: 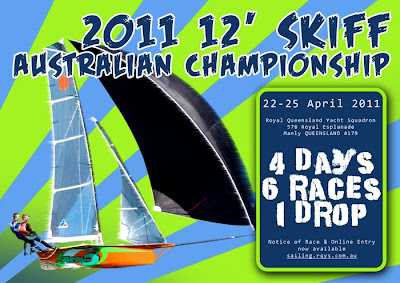 Also, the Cherubs have been invited again. See link to their newsletter.

Go to RQYS regatta page for details
Posted by QldSkiffies at 11:25 PM No comments: 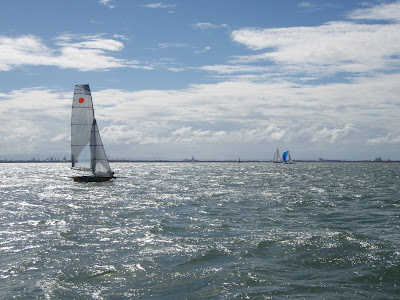 Perfect 10-15knots and clear blue sky met us at the boat park for what was to be a great day on the water.
The tuggers and squidly put in big rig, and the Sled with guest skipper Cassie B put in #2 as we were lacking the extra 50kg required for big.
Cass nailed the first start and the Sled did what it does best... lead. a few tacks later and the extra power of the squid had us beat, but we held the tugger to the top mark.
Downwind, the squid showed us their new threads and disappeared to the bottom mark. A nervous Cass decided to do it Cherub style, so the tuggers also drove past us (after putting it in on the top mark bear-away).
Next beat and Cass drove it low and dirty, pulling us back into 2nd with blinding speed. After a shakey set, we set off to the finish with the tuggers bearing down on us. they managed to get us by 25m in the end. was a good battle. Squid was in the distance celebrating their kite purchase with champagne.

For the 2nd race, the wind kicked to 12-15 and we were started to dump quite a bit of main. the big rig boys were also shaking some cloth apparently. the heat was on. The tuggers got the best of the start and pulled away up the first leg to lead with squid close behind and Cassie drving too hard into the corner and finding out how not to bear away in a skinny 12. No kite so we were up and away quickly, kite up and then we overcooked the gybe, so had a longer splash. Onlyl just enough weight on the centreboard to get the boat back upright. Next work and we were once again in low groove, trying to make up some ground. Then... bang!! SPlash!>!!> wtf??? rig gone. forestay lashing didn't like the long christmas layover, so decided we'd had enough fun fo rthe day.
Thanks to the young kid in the rubber duck who held us and dragged the sled home. Not sure how the last lap went, but Tristan was calling the day his, so i guess they dominated.

Skinny took an early mark to head off to Mexico to see some sheila (dirty weekend report to follow shortly - skinny). The rest of us had a bbq and beers at my place.
Good times.
Richard
Posted by QldSkiffies at 11:15 PM No comments: 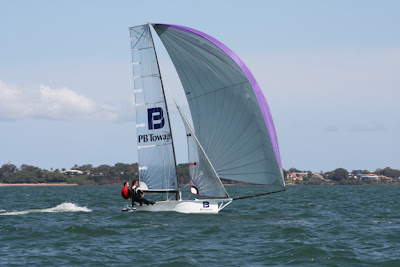 The breeze was great, N/NE freshened up to top end second.
Our first race started in my usual style, about 5 minutes late... so we followed a few boats around the course, while I tried out my skinny boat legs. Everything was different and I put it in once or twice.. tried my best to execute the advice Tristan had to offer.
Second race.. hit the line on time, with pace & clear air, just down from the boat. Had to smile as we rolled the fleet off the line - compared to the 505's we were footing like bastards, and every time we came over one they'd pinch a little.. lose pace and die in the arse. heh heh.
Got to the top mark(s) well ahead, but the others and 50's decided to go around the closer etchells mark. Had an awesome run, wind had picked up nicely now and well ahead of the fleet. Misjudged the layline so had to put in three gybes. Last gybe the vang uncleated while tristan dropped the kite. My brain freaked out, (no vang + skinny boat = capsize) so I put my plan into action: had a big wobble and put it in to windward.. no room for error here!
Went around the next lap, mostly driving off the jib in the gusts. Skipping off some awesome ramps and trying to keep it flat. Coulda done with a fruity at the back.. something small happened, maybe lost footing a little and we stuck the nose in for nice mine, both landed at the forestay. Tristan's turn at the helm.. and it's nice at the front of these boats! (for starters, your nose isn't in your crew's bumcrack!)

Ben
Posted by QldSkiffies at 9:34 PM No comments: