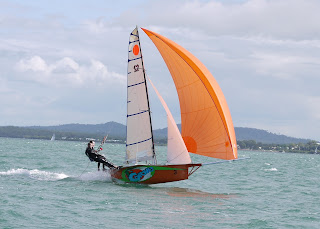 The rain couldn’t keep us away from a tasty 3rd rig day.
Apparently the wind was strong early on but I wouldn’t know because I turned up late, just like skinnyman the rock star.PB and Ghetto put in third rig, but the wind dropped leaving PB one-wiring into an easterly.  The flyweights on Ghetto were still two wiring and we weren’t too keen about that.Course was set and it was clear the pin end of the start couldn’t be laid on Starboard.  And Ghetto Sled will attempt the port tack bandit as sure as night follows day.  We lined ourselves up underneath them and let the game begin.  Lucky for us we hit the line right on the pin with speed, closing Richard out.  What I wasn’t counting on was their splash tack afterwards!  It was a handy margin to have because they made plenty of ground on us up that first work.  Two sail reach past ‘the best laid wing mark this year’!  The wind was building and began to swing back south so we followed it.. We were comfortably on the wire now and the easterly brought a great little swell down between king and green.The course was adjusted for the second race so this start was a bit more normal.  I was starting to get the hang of the boat more and we hit the line on time again!!  The clowns on the start boat made yelled out some gun noises, called something about OCS but I figured they were joking.Second race was somewhat similiar to the first, with Ghetto hot on our tails.  With a little more time Richard and Ben C will be a well oiled team – look out!
Squid’s gonna be there next weekend too, game on ladies!
Race 1: 1st PB, 2nd Ghetto Sled
Race 2: 1st PB, 2nd Ghetto Sled
BenG
Posted by QldSkiffies at 8:35 PM